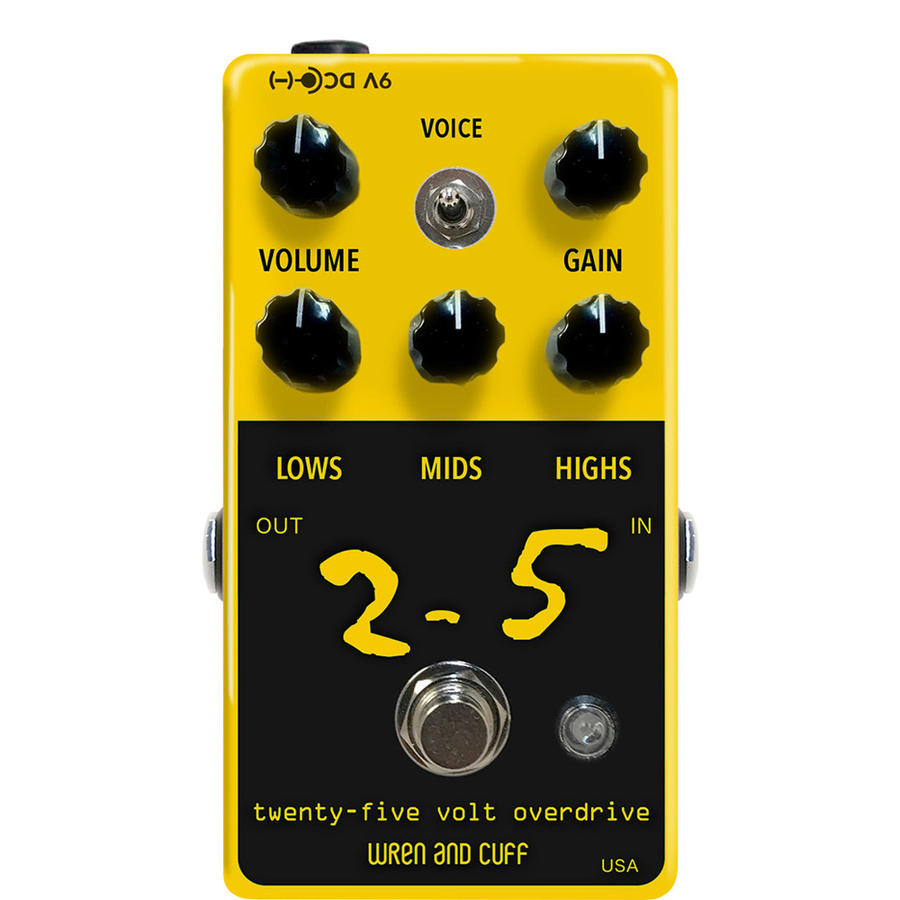 Muscle! Thats why. 25V opens things up considerably, creating an unusually wide dynamic range, more headroom, and more output. You’ll really feel it when you dig into the strings. The response is super reactive, and the overall feel of the pedal is much different than a typical overdrive. It just feels powerful.

The EQ section of the pedal is set up a bit differently than many other pedals. The controls are basically like a vintage Fender™ amp (although the pedal in no way sounds like a Fender). One thing this means is that the controls are interactive in relation to one another. An example would be that turning down the treble will not only cut the higher frequencies, but also raise the lower frequencies a bit. This type of interaction opens up an almost endless palette of tones by adjusting the Lows, Mids, and Highs, as opposed to a simple high pass, low pass, setup. One of the things that makes the Two Five unique.

Voice switch toggled down, there are two Mosfet transistors used as diodes, and a germanium diode as well used to create a super rich, saturated gain (sorta Marshall™ like). Flick the switch up, and two LED’s are used for the clipping. These LED’s have a much wider range of dynamics and lend to a more open, somewhat cleaner sound Sorta Fender™ like). The Two Five gain will be more crunchy, cutting, and less saturated than the other setting.

Don’t worry if “Mosfet”, LED, and “germanium”, don’t mean anything to you, I just like to give lots of details if you are the type that cares about that stuff.

After many hours of testing, A/B’ing, and comparing, we finally settled upon a JRC3404. A distant relative of the famous JRC4558 some covet for their use in vintage Tube Screamer™ pedals, this op-amp is tough enough to put up with 25V, but still has a warm enough tone to keep things nice a sweet.
*Note:
We originally were going to use a LM358 Jfet op-amp for the Two Five. We jumped the gun a bit and did a couple press releases mentioning the LM358. This caused some confusion, so you may find some descriptions online incorrectly referring to the LM358. We apologize for this confusion. Please know there are no units that have the LM358, all ended up with the JRC3404.

There is a TON of output on tap. A lot. Be careful with this! You can peg the front end of your amp incredibly hard which is great for pushing it into a natural overdrive.

If you really want to dig deep on this before you purchase, download the manual to learn even more.

Continue your shopping! find other products of overdrive