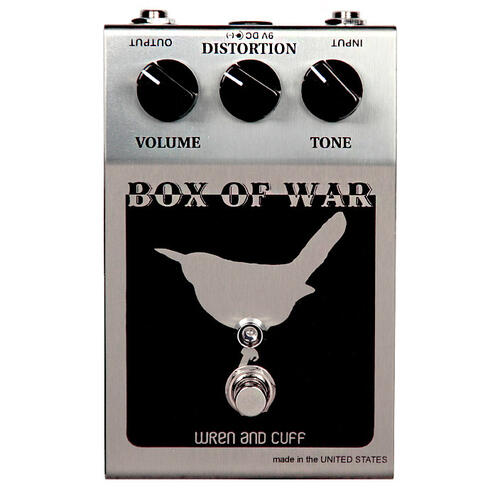 We’ve brought it back! Originally released in 2012, the original Box of War is back.
The Box of War is a true recreation of the famous “Civil War” fuzz pedals from the 90’s. We say “true recreation” because we pride ourselves on truly digging into the vintage units we recreate and go to great lengths to duplicate all aspects of the original circuits to the best of our ability.
The tone is in the details we like to say…
Rest assured we have spared nothing in researching this rare, much-loved, but cheaply made famous fuzzer.

This box is HEAVY DUTY! Not at all one of the thin aluminum type enclosures you see on many cheap pedals. When you hold this pedal, it is heavy. The idea behind this was to make an enclosure as heavy duty as the old Russians but with a smaller footprint and of course super high quality everything.

It can also double as a weapon if you get in a scrape after a show. A nice thump on the head with your BOW should fend off any potential threats.

Reportedly favored by David Gilmour, Thurston Moore (Sonic Youth), and many others this is your chance to own a vintage recreation that is made to be beat-up.

Very closely related to the Tall Font BM’s, the Civil War’s have a bit darker and a bit fuzzier tone. Like the Tall Fonts, they’ve got less output and are less fuzzy than most other muffs but are cherished for their woody sustain and presence. These beasts became a secret weapon for many but usually required two or three back-up pedals due to the poor quality components to be sure a pro-level player could make it through a tour using one on their board.

The Box of War solves that problem. Sound, looks, and reliability.
Make one yours!
Continue your shopping! find other products of fuzz